The “Mail Art Areacreativa42 ” project stems from a desire to enhance relations and contacts with the artists that the association has grown in recent years activities through the many exhibitions promoted.
We are in the second edition. The first (2013) was free theme, this year
we joined the Organizing Committee of the Centenary Celebrations of GAC Guglielmo Achille Cavellini and invite artists to express themselves with reference to Cavellini.
Emilio Morandi and Franca (Artestudio Morandi) collaborate with us on the project.
On February 2014 was widespread call to artists by mail and facebook.

The artists are called to send to:
Associazione Culturale Areacreativa42, via Ivrea 42, 10086 Rivarolo Canavese (TO) Italy
a postcard on the theme of GAC
measures 10x15cm on free support and technical
by April 30, 2014.

The cards received will be displayed in an exhibition from the First of June to 22nd in House
Toesca, head office of Areacreativa42, and other venues later on demand.
It will be accompanied by a catalog, with a work by artist.
The cards will not be returned, neither sent.
All the postcards sent by April 30 will be included in the catalog and Artists are invited to the inauguration of the exhibition, the First of June, 2014 (see the program of the day on the back of the postcard of the call).

We recall that in 2013 we were hosted at the Art Factory in Catania and “Rai 3 Piemonte” has dedicated more than once a wide service.
At the same time continue the work of mail art with children and young people from schools that will participate in the inauguration exposing their works. 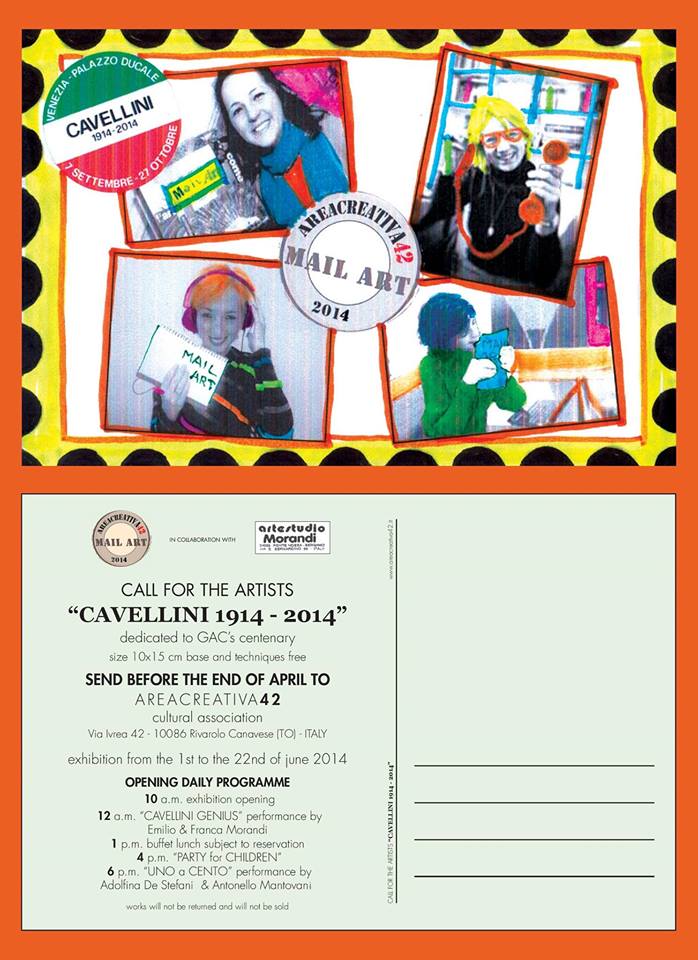