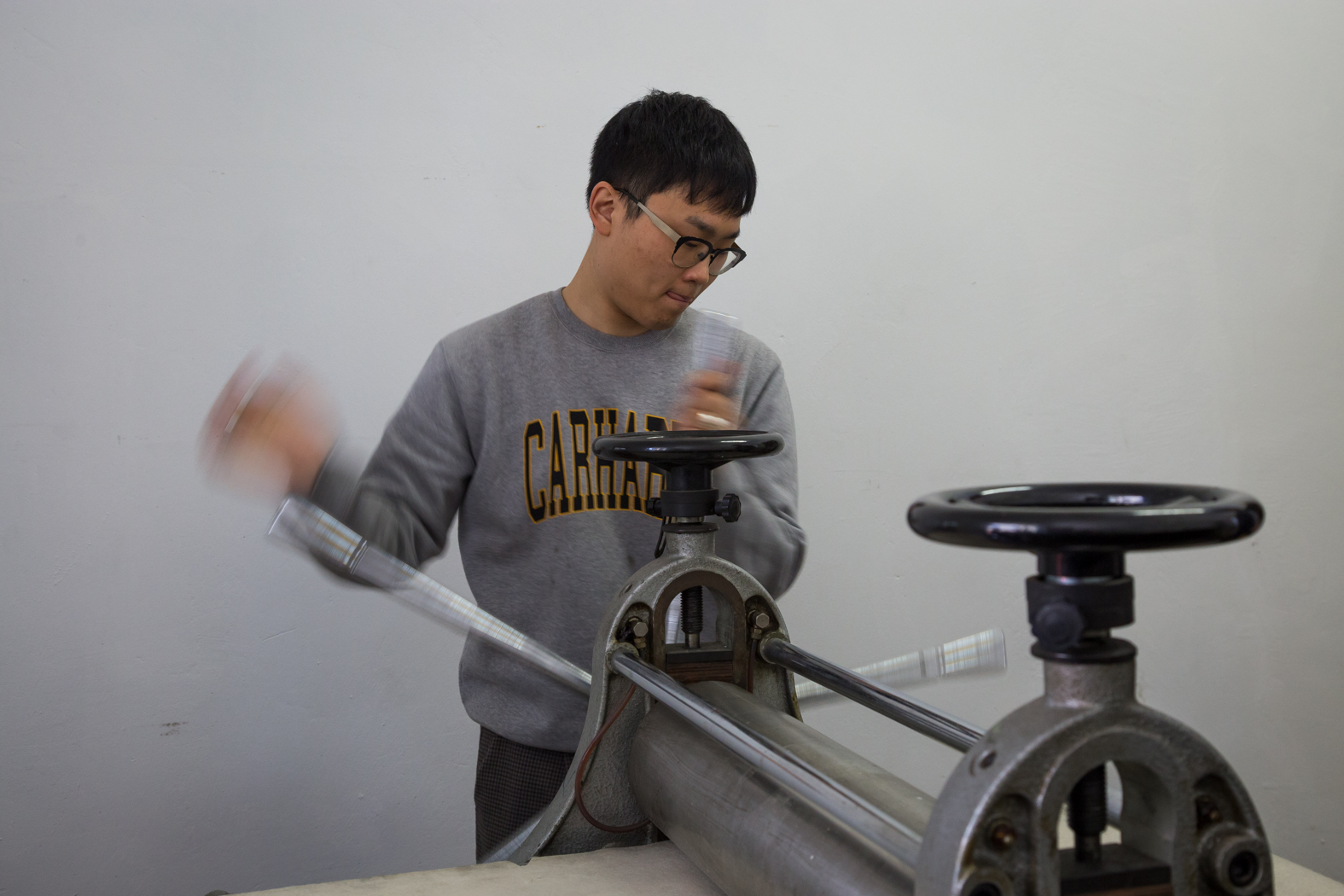 The artist Yoon Il Kwon was in artist residence at Areacreativa42 in March 2019 on the occasion of his Turin exhibition at CRAG Gallery.

During his residency, Areacreativa42 organised a lecture with the young curator Giorgio Bena and  the public.  In the same occasion there was a workshop of chalcographic techniques under the supervision of Marco Spampinato during which the artist told the public about the theoretical and practical nature of his work with the techniques of print, realizing also artist proofs in front of an audience, illustrating the passages of their work.

From March 21st to April 27th CRAG Gallery hosts Vestige of Seeing, solo show of an artist able to tell the beauty of what we have lost without even realizing that we have ever had it.

Yoon The Kwon is a 29-year-old South Korean artist who, despite a certain shyness, with the strength of his work is able to say everything that needs to be said. I met Yoon during the opening of his exhibition, but I also had the pleasure of conducting a “conversation” with him within a workshop organized by the Areacreativa42 association, during which I had the opportunity to learn more about the different participants aesthetic and technical aspects of his work.

Yoon is in particular expert in printing techniques, in which he is specializing at the Royal College of Arts in London, and the works that make up Vestige of seeing demonstrate all his mastery of this language in its various forms.

The works presented are divided into three nuclei that correspond to as many technical and aesthetic approaches, excellent indicators of the young age of the artist who also give reason for the healthy experimental tension that animates his work, but which Yoon still manages to convey organically inside of the same thematic research focused on memory and memory as a place for reflective meditation on the past and a key for reading, interpretation and interaction with the present and the future.

“Fast paced society” – literally “fast paced society” – is an expression that recurs several times during my conversation with Yoon, as something that he intends to somehow fight with his work: both in the type with the techniques that uses, linked to slow and measured work times, that in the themes he chooses to deal with, which not only dig into the past but evoke moments of simplicity, serenity and contemplation, the artist seems to contrast with seraphic determination a social context that imposes a frantic search for experiences to consume without ever having time to savor the nuances.

For example, in the The Path of Eyes series, he mixes different supports (in particular by applying glass tesserae on which some negatives are imprinted on a photographic print) to compose mosaics that tell his travels not through the classic “souvenir” images, but through the simplicity of objects / subjects that acquire value as evidence of significant moments for the individual’s personal history.

The works of the series The Movement in the Space, however, are traced back to the artist’s childhood memories, however animated by a reflection that manages to act in the archetypal sphere. These engravings, the subject of the workshop conducted by the artist, in fact represent some children intent on playing, whose movements are rendered through a multi-pass printing process based on the progressive loss of ink of the matrix, which moving on the sheet at each stage produces a a result that closely resembles Eadweard Muybridge’s photographic studies on the movement, however embellished by the progressive loss of definition of the form which somehow testifies to the action of time on memory.

The archetypal value of this work consists in the fact that the children who populate its engravings are completely anonymous, and during the workshop several people have seen, with a certain emotion, the fragments of their lives in those images so simple and delicate.

In this emerges a fundamental aspect of Yoon’s work, that is the declared will to evoke the memories of others with his works, to make sure that others can be recognized in his works that do not want to be autobiographical, but to achieve a universality of memory:

“My memories are tools that I use for my works, but I want to get to use the memories of others” was one of the phrases that struck me most of his artistic thought”.

This vision has implications that could produce interesting contaminations with the exhibition’s most impactful work, Memory, composed of blocks of paper tissues on whose sides the artist has screen printed the faces of his school friends taken from an old photo. Many of these faces – he tells me – because of the past time seemed alien to him: this led him to elaborate bitter considerations on the power of the image as a source of memory, which he concretized in these portraits that are fragmented and irregular, and there they speak of the inevitability of the disintegration of our memories, and of the need to actively act to preserve them.

It will be interesting to find out if and how the artist will be able to develop this work to bring it into a universal sphere capable of creating that empathy that I have seen penetrating strongly in the emotional sphere of those who have dealt openly with his works, and which in my opinion it represents perhaps the real strength of his research.

For now we just have to wait and take the opportunity to have at hand the work of an artist of this level, who has all the potential to become – and perhaps already is – one of the names to be observed carefully in the near future .