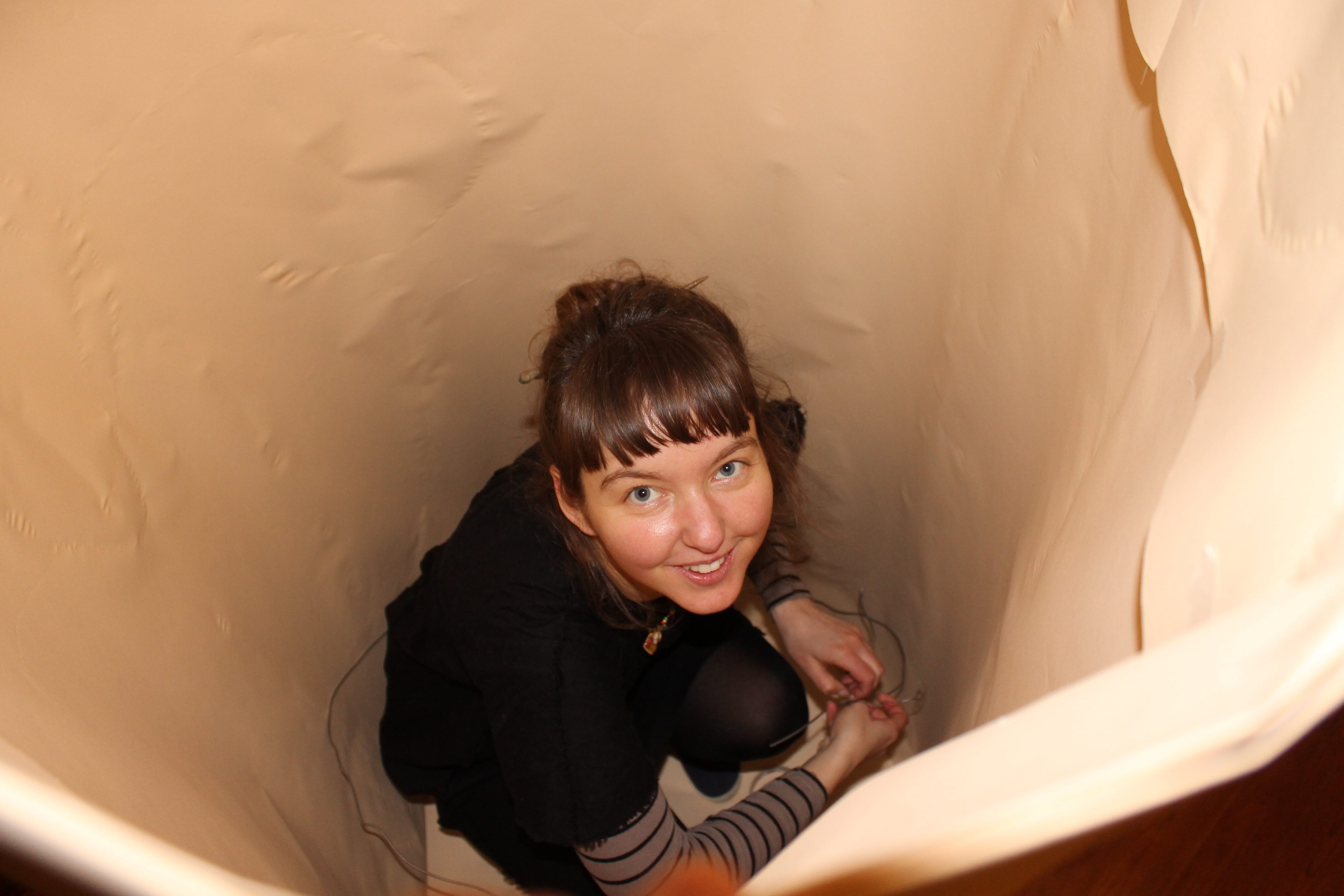 Zuzana Pernicova was in the artist residence at Areacreativa42 twice: September – November 2016  and January – March 2017.

The most important moment of her residence was during the performance “The paper houses” (12 February 2017), organizsd during the residence in collaboration with the young curator Martina Furno.

LINK TO THE CATALOG

I knew the work of Zuzana Pernikova in the occasion of the third edition of the Carlo Bonatto Minella Prize – Art Prize CBM. The jury liked her work and she was selected among the finalists. At that time, the artist was committed to deepening the themes of solitude and incommunicability. I immediately thought that the experience of the artist residence at Casa Toesca could have been supportive in Zuzana’s artistic career and we agreed on a program of “week-ends artist residence”. Zuzana has prepared an installation and a performance project with the curator Martina Furno and they developed “The paper houses” involving some members of Areacreativa42 and other artists. During her stay we organized meetings with schools, children and adults, and also drawing workshops. The activity, partially documented in this notebook, has had the consensus we expected: I am convinced that it was of great help to the artist and will remain a very significant experience for those who were able to live it with us. As in any artist residence in Casa Toesca, the artist arrives with his own knowledge and experience, immerses himself in the ancient atmosphere, explores the territory and compares himself with young curators, students and with us from Areacreativa42. And the journey into the world of art continues.

“Loneliness is never with you; it is always without you, and only possible with a stranger around: place or person who is, who completely ignores you, so that your will and your feeling remain suspended and lost in a anguished uncertainty and, ceasing all affirmation of you, cease the very intimacy of your conscience. True loneliness is in a place that lives for itself and that has no trace or voice for you, and where therefore the stranger is you “.

Zuzana Pernicova is an artist with a calm and curious character. For years, she has been collecting stories of loneliness, absences and misunderstandings in her diaries. She observes the reality with attentive and discreet eyes, without presumption or judgment: between these pages real stories have been stratified, in the form of sketches and collages, where the graphic medium, frank and uncontaminated by definition, has revealed itself in all its expressive power, capable of collecting – with tacit violence – fragments of life. The humanity that populates these stories is, in fact, introverted, fearful, lonely, too often unable to communicate with the outside world. In quantum physics there is a scientific explanation for this discomfort: two entities cannot coexist simultaneously in the same space, at the same time and in the same energy level. If this were the case, even in the performance “The paper houses”, each person would have had to exist in a different space, at a different time and on an empathic level different from the others. But what science cannot bend, and which Zuzana has chosen as the object of investigation, is the sudden and fortuitous figure.

The participants, of different ages, were invited to enter into paper cylinders of different sizes, which together wanted to recreate the idea of ​​a wooded environment: each person was thus entrusted with a “tree house”, each existing in itself, but part of a unitary whole. There is only one rule to respect: silence. Scissors and charcoal in hand, everyone started to follow their instincts and perceptions by designing and carving their home at will. Initially, everyone sought comfort in their own space: Bedouin tents, castles, submarines, rooms covered with spaceships, sea monsters and childhood games were born. The sound data, emitted by the rubbing of the charcoal on the paper surface and by the rattling of the scissors, has acquired increasing intensity, up to the point of “breaking”: the unexpected. This is how enterprising people sought an opening: a window to breathe, a tear to let the light in, a porthole to deliver messages. Someone threw some paper balls carefully, waiting for a reaction. Another, with a daring and indiscreet move, escaped from his own cylinder, tearing it open with a liberating gesture, and then insinuating himself into that of others, without fear of being rejected. As in any society, the disturbing element has received only partial acceptance, but has had the time and the courage to set in motion a mechanism of “revolt”, to generate chaos. And it was precisely in the disorder that something took shape: the relationships, silently woven like underground roots, created a visible map, a tortuous and tangled track, of which only fragments of paper remain and a feeling in the air that smells good.