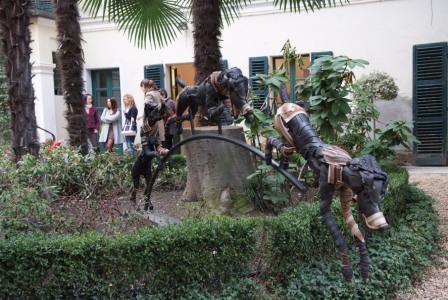 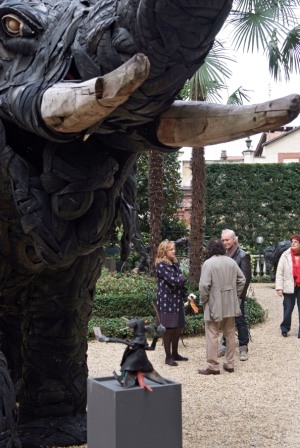 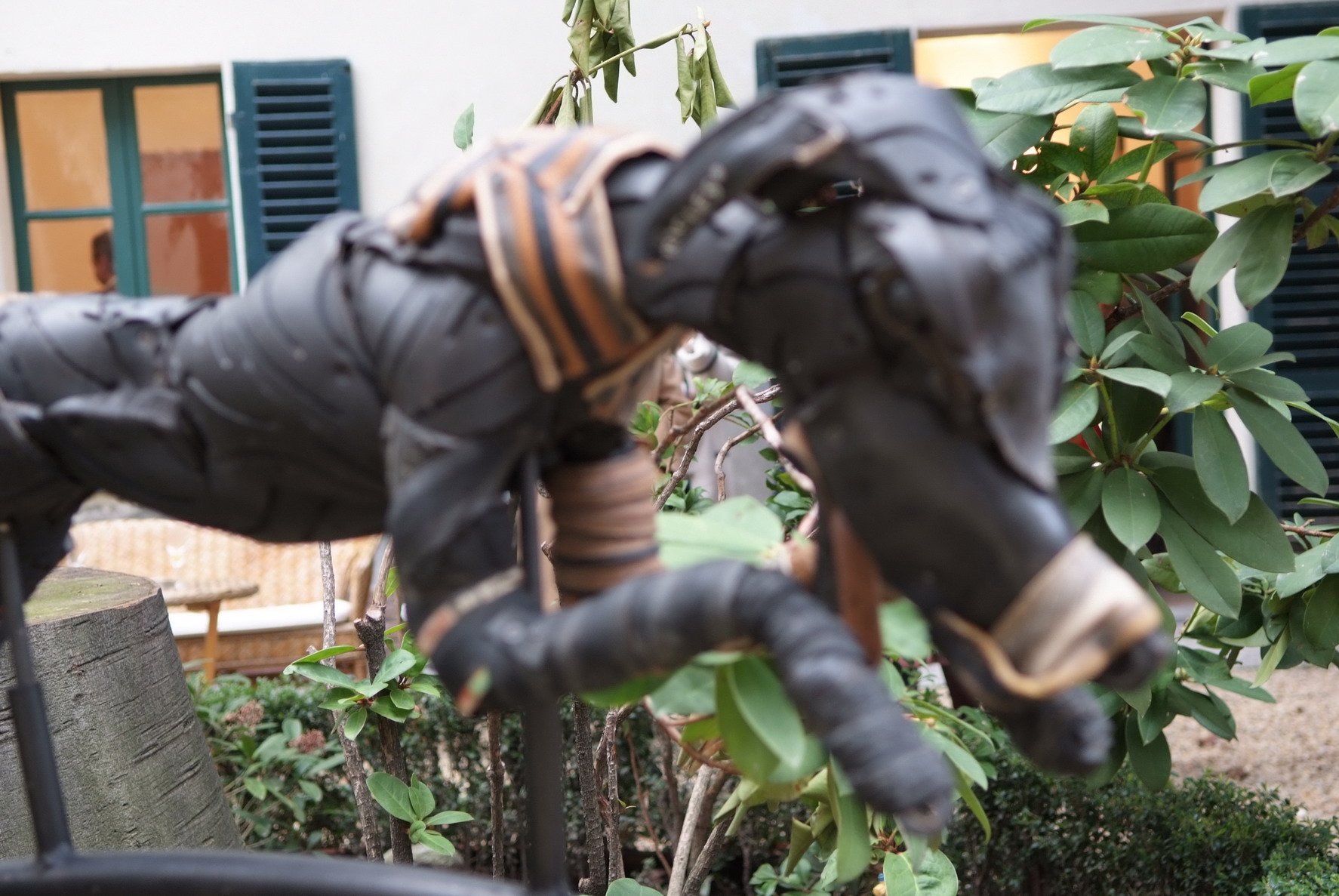 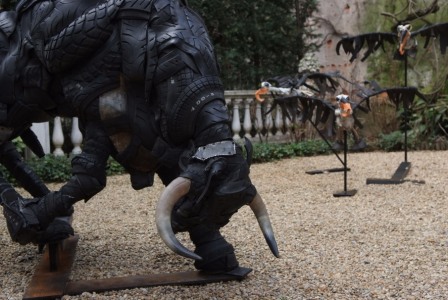 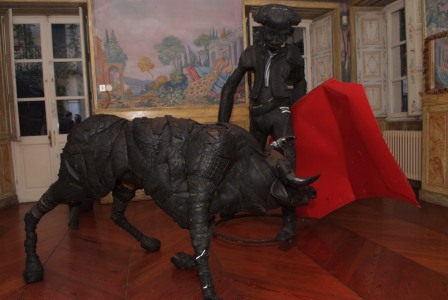 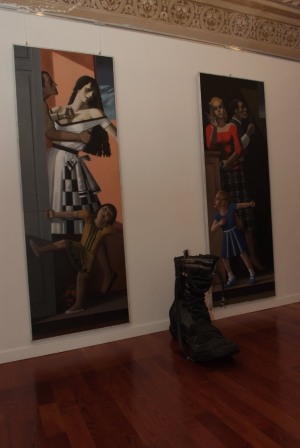 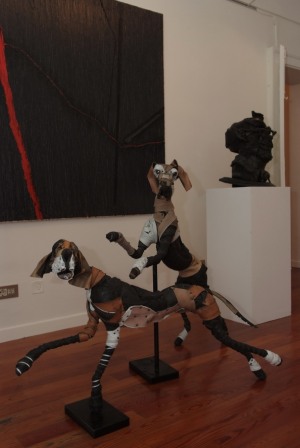 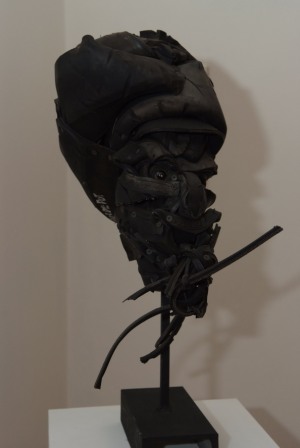 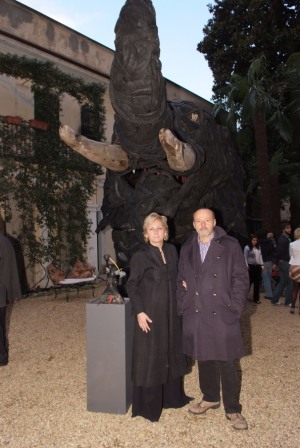 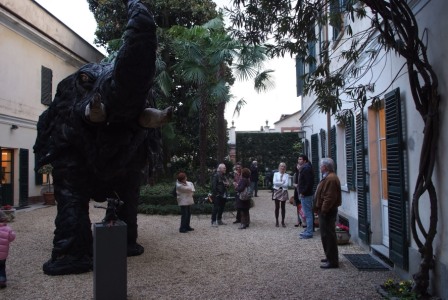 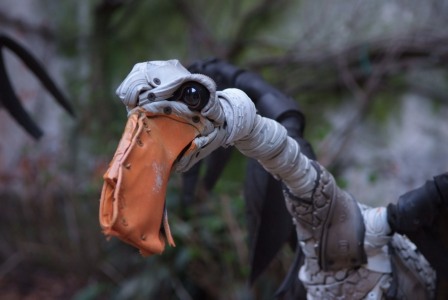 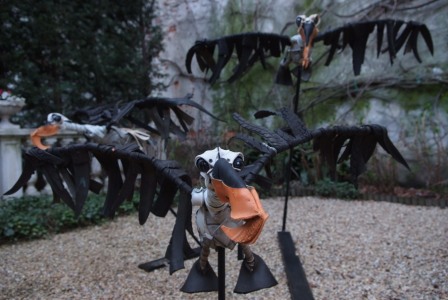 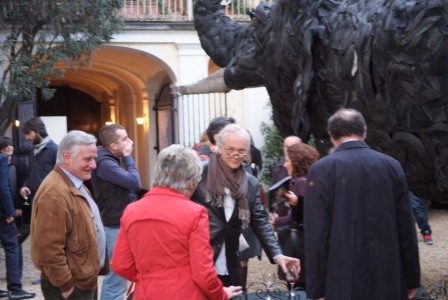 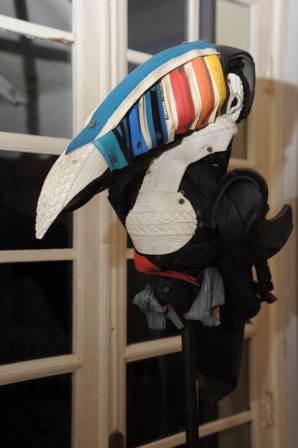 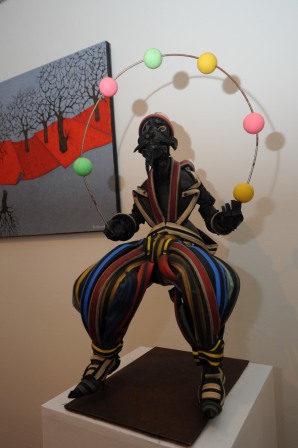 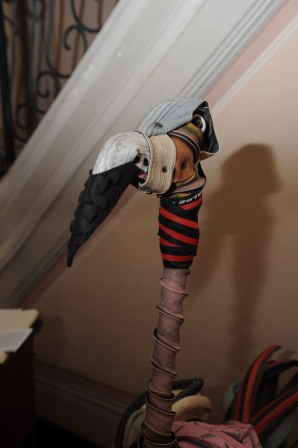 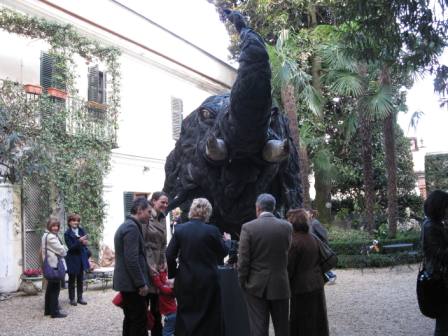 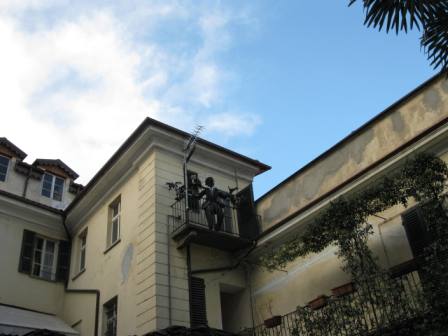 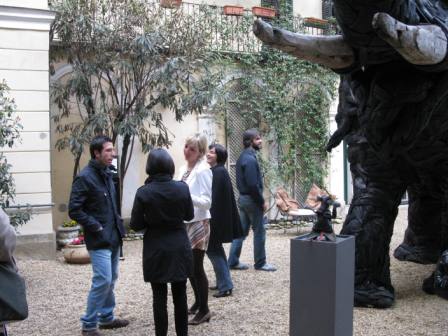 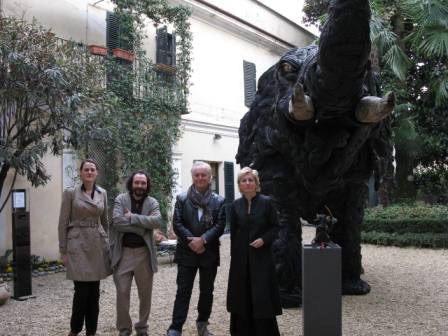 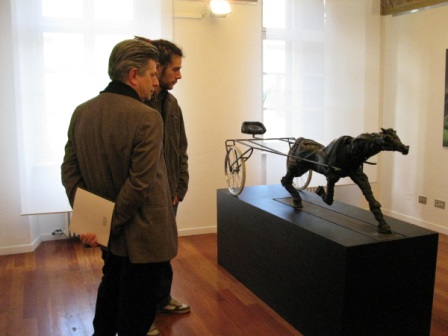 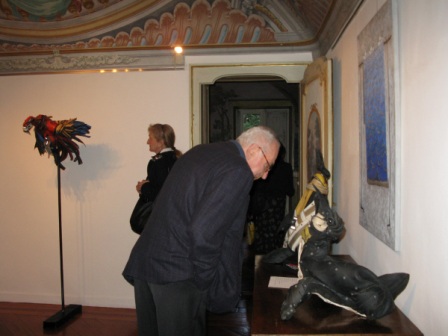 Exhibition of sculptures made ​​from scrap tires by the Belgian artist Serge Van de Put.

A bold proposal, supported by an instinct for contemporary art,prompted the choice of Karin Reisovà and Livio Girivetto, promoters and curators of the exhibition entitled ” ALONG THE ROAD ” of sculptures by Serge Van de Put.

The new project is in the eighteenth-century Casa Toesca.

The works in wonderful iron tires of the ‘ Belgian artist returned from a striking presence with its ” Elephant ” floating on the waters of the lagoon, in the Venice Biennale 2009. Now is the guest of honor, among the works on display in the new exhibition in Piedmont .

Karin Reisovà and Livio Girivetto, with determination and passion put 30 works of rare beauty from the 27 of March to April 25 will be exhibited in their exhibition space with a staff dedicated to the artist that will unfold between the major works which gathers the gallery.

Areacreativa42 is doing at the same time important exhibitions: remember  the works of the painters of the school of Turin Felice Casorati  or the exposure of the delicate collection of etchings by Cino Bozzetti.

Below is also a great passion for the turning points and a conscious awareness , as in the exhibition of the designer Diego Gugliermetto, ( exhibition May 2009), by the noble fathers as the historic Gufram.

From March 6 will be exposed to the public in the garden ” Elephant ” made ​​cutouts tire size that comes from the 2009 Venice Biennale where was exposed and present in the general catalogue of the Biennial. After a subsequent stage in the ancient port of Genoa comes to AREACREATIVA42 , in the garden of the House Toesca .

EVENTS: Sunday, March 14th for CIOCCOLAUTO the elephant made ​​from scraps of tires for cars will be present for the public.

Anyone who has seen and, why not admit it , even enjoyed Avatar , find singular affinity between the monstrous animals of the film by James Cameron and zoomorphic sculptures by the Belgian artist Serge Van de Put.

Two ways and creative worlds that , in truth , little or nothing in common stylistically and technically . Avatar is an animated film high technology and those strange dinosaurs that we see on the screen in three dimensions are electronic images purely virtual , while the works of Van de Put appearances are concrete , tangible , made ​​by assembling virtuosity with old tires and inner tubes used cars, motorcycles and bicycles , in a sort of ready-made Dadaist that proceeding with the deconstructionist method , to quote Derrida , transforms discarded materials , purely functional and dead, into works of art , characterized by a playful aesthetic and a little ‘ , in fact , fiction . Yes, because the hippo, bull , elephant, turkey , dogs , horses, kangaroo made ​​by Van de Put , and even some strange human beings, that they be made ​​with the use of plain black tires , the tread still visible , take a look alien and surreal, like some characters of Avatar and the cinema of science fiction in general. Only in Van de Put the figures are isolated and extracted from a narrative context ; the fact is admired , even next to each other , such as attendance isolated, lonely , living independently , regardless of each other, in an environment that unites them only for the time of the exhibition . After can be separated from the sun and continue to live in a condition that can be not only (and not so ) museum , but also the most varied contexts , from the house of a private residence at the hotel, from the square to the mall.

Yes, because all the work of Serge Van de Put is radically antielitario and popular. Is ideal for both character , he eschews situations rarefied and closed , typical of certain museums and exhibition spaces for contemporary art , the icy white cube where s’affollano works hard to understand for the general public , because of that excess of conceptualism that affect much of the art today. He wants , instead , that his sculptures can be enjoyed both by the laborer who works in a factory, maybe just those producing tires that are the raw material of his works , both from ordinary people, from all walks and of all ages, from children to the elderly, the young African, Asian , South American to the intellectual , New York and Brussels . And ‘ democratic idea of art which originates , unreported and perhaps almost unconscious , New Dada and Pop Art to some , but ideally it relates to a vision Situationist art, close all’idee advocated by the philosopher Guy Debord ( Paris 1931-1994 ) who argued that everyone has the opportunity to be artists. It is no coincidence Van de Put is a self-taught , that after working for years as an animator and designer in Club Med was discovered and freed as an artist, with the specific desire to be out of the Consolidated System of Art and also by movements and groups .

His being a maverick it may reduce, to some critics , to the rank of amateur and improviser , but, in fact , its rigor it takes more than by individual subjects , from the estate of style all his creative path ; because in the overview it is clear homogeneous and harmonious style , characterized by a sharp irony towards the Art System and our company’s consumption and waste. On the other hand , the creation of these very imaginative bestiary may even be related to certain medieval bestiary , with the only difference that here the imagery is Post-Human . His work is rooted in fact , in the context of this our post-industrial era , and the poetics of waste, the waste recovered and translated into an aesthetic dimension is without force due to detournement theorized by Guy Debord (*)

* The detournement is a method of alienation that change the way we see objects commonly known, snatching them out of their usual context and placing them in a new , unusual relationship to start a process of critical reflection. This method is used in the field of view by means of collage and installation, but you can also detournare concepts : the case of plagiarism digital and analog Adbuster American magazine . (from Wikipedia )